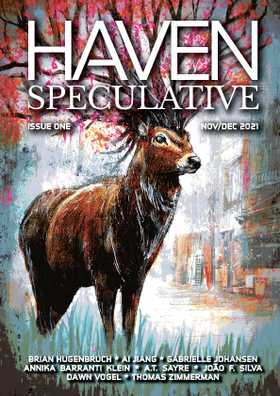 By Gabrielle Johansen in Issue One, November 2021

She was only two when the now defunct U.S. government launched Skylab. Now she was pushing seventy-four, just below the waitlist cutoff to be on one of the last Mother Board Transports leaving Earth. A global consortium of corporations had decided no one above the age of seventy-five would be allowed to board. That would be it. Sayonara, Terra.

A few choices if she was left behind. Slow painful death by radiation poisoning or a quick company-sanctioned suicide, delivered via obscenely cheerful, virulently pink pills.

Jeannie knew what she wanted, and she was afraid of having her choices taken away.

“What if you get on, but I don’t?” she asked her husband Matt. They were getting ready for bed. They were both moving up the list, but his position was higher in the queue. Only families with minor children were processed together, taking up a chunk of sequential numbers in boarding order. Their children were adults and had families of their own.

Matt somehow managed to double the wrinkle capacity on his already weathered forehead as he scrunched it up.

She relented by saying, “Of course you would go. Think of the kids.”

“But I wouldn’t want to leave you,” Matt protested. “Besides, the kids take care of themselves.”

Both Oscar and Faye had already departed Earth with their spouses and kids in tow on the one thousandth MBT, The Acorn. Jeannie took the ship number and name as good omens, even though she wasn’t superstitious.

“Think of it as preplanned widowerhood,” she said. She meant the remark to come off as a joke, but as usual Matt read a tartness to her inflection she could never quite smooth out, no matter how hard she tried.

Getting what passed for groceries a week later, they perused the paltry supply of root vegetables. There were a few withered turnips, plenty of russet potatoes and one spindly bunch of carrots. Even the supply of canned and boxed goods was looking low. The shelves were near empty, each aisle containing no more than a dozen or so objects on the once stuffed shelves.

Most manufacturing had stopped by now and fresh vegetables that had to be grown aboveground were impossible to get, thanks to the radiation. However, scientists had created a breathable, impermeable net to be filled with cleansed soil, and it could be used to grow almost any underground vegetation. There were more sieverts of radiation than what used to be deemed safe in these net-taters and net-carrots, but in the new normal, you took your chances.

Jeannie greeted Samir at the register, “Hello friend, they haven’t kicked you off-planet yet?”

Despite her cheer, she wasn’t sure what she and Matt would do for food if Samir’s closed.

“I am too old,” Samir replied plainly. Still, his eyes crinkled at the edges and a smile hovered just beneath his lips.

“I wouldn’t have pegged you for a day over fifty,” Matt chimed in.

“I’m so sorry,” Jeannie said. But who would have known Samir was older than her with his smooth brown skin and hair barely touched by glints of silver?

Samir gave a full smile, saying, “My wife and I are content. We have led excellent lives. Our sons have gone to spread our name throughout the universe. It is good.”

On the way home, they paused in front of one of the electronic billboards to check their status on the transport list.

And much lower down:

The gap was growing. Safely seated on the hoverbus, Jeannie stared out the viewport. The sky was prettier in irradiation times, all kinds of colored streaks day and night as the atmosphere was stripped away, molecule by molecule. Dancing swaths of deep violet and aquamarine twirled across the horizon.

“I’ll never leave you, my love, not if I have any say in it,” Matt said, squeezing her hand. They debarked the hover. Their apartment was still ten blocks away.

Before bed one night, Matt said to Jeannie, “I love you with all my heart, but if our positions on the list were reversed … ?”

He begged her with his russet brown eyes not to say the words.

“Do you want me to lie?” Jeannie demanded.

Matt looked at her, shaking his head. “I want the truth.”

“I can’t believe you,” Matt ground out.

“What? You want me to stay here so we can die together?”

Matt was not to be deterred. “After a lifetime, don’t you want to be together in the end?”

She tried to reach out, one more time, saying,“It isn’t about survival. I’ve had a wonderful life with you. But this is the one chance, the only chance to go to space. Doesn’t that excite you? Doesn’t it seem worth any sacrifice?”

Matt drew his lips into a thin line. She knew that look. It was natural vs. dyed hair again, an argument they had over and over, throughout the course of their marriage. Matt never understood her need for change. She never understood why he cared so much whether her hair was brown or violet. The stakes here were higher, the choices had actual consequences, but it boiled down to the same differences.

It had been she who first suggested having kids. Jeannie who had convinced Matt to send his art portfolio to as many agents as he could. It was the very move that vaulted him from accountant to artist. When they were younger, Matt liked Jeannie leading the charge. But the older they got, the more he dug in his heels.

“I have everything I need right here,” he said.

Jeannie patted him on the shoulder. “I’m sure we’ll both get to go. No need to fret.”

Jeannie woke up a few minutes before the alarm. They had carried on for days as if there was no tension. After so many years of marriage, you learned when to let things lie. She clicked the alarm off and snuggled up against Matt’s back. He barely budged.

Muttering “Sorry,” Jeannie got out of bed and opened another towelette pack to wash up for the morning. They rationed water where they could. He was still asleep by the time she finished her ablutions and got dressed for the day. There had been a small decrease in the number gap separating them on the departure list. She was eager to go check the boards, even if it rekindled the battle.

“C’mon sleepyhead,” she said, striding over to jostle Matt awake.

Matt responded neither to her words or her touch. He felt strange beneath her fingers.

She knew. In her heart, she knew.

She snatched up his reading glasses from the nightstand to hold them under his nose. No fog on the lens. She took his pulse. Nothing.

She sat down with a boneless slump beside him and stroked his shoulder, his cheek. The skin was clammy, like the homemade Play-doh from her hippie pre-school.

A great red and black wave rose inside her heart as she whispered, “No, no, no.”

He did not move.

Once the arrangements had been made, Jeannie didn’t know what to do with herself. All the day-to-day tasks that had taken so much time were halved without Matt. He always forgot something at the apartment or wanted to dicker with Samir. Jeannie missed his running commentary, the way he helped her down the stairs, the weight of his gaze when he thought she was no longer paying attention.

She took to riding the hoverbus from one end of the line to the other. She checked the bulletin board as many times a day as she could manage. When she went home, late, much later than she and Matt ever stayed out anymore, Jeannie could not sleep. The bed was haunted by his scent, even after she washed the sheets. She would end up on a makeshift blanket bed on the floor or doze in her chair.

Since Matt’s death, Jeannie’s position in the queue for the MBT had skyrocketed. A good thing too. She wasn’t sure how much longer she could resist the call of those pink pills. Taking them would be better than living right now. And perhaps she would find Matt in some afterlife or reincarnation waiting room or whatever came in the beyond. She could tell him he was right. When he died, he took half of her soul.

Jeannie left Earth on November 7th, 2045, wiggling beneath the straps keeping her anchored to her pod. It rotated outward with an excellent view of all the action through the transparent wall of the observation deck. It was a bright day. A buzzing permeated her bones as the engines roared to life, and then the ground was falling away. She floated between layers of cumulus puffs, thinning out to cirrus feathers brushing the invisible surface of the sky. It was beautiful, but nothing she hadn’t seen from the window of a plane.

And then she was popping out of the atmosphere. Jeannie was breathless in the surrounding void, the bright arc of the Earth below. She swore she could see Matt’s face, translucent among the stars. He had the same look in his eyes as when he first held their baby Oscar in his arms, moments after she gave birth. It was a look of wonder so pure it had its own melody.

The auto-injector pricked her neck. In a few seconds she would go into a suspended coma. When they landed at the Mars colony Luisitania 3.2, all the passengers would be revived. If it went as planned, she would be greeted by her daughter Faye.

She wondered if her granddaughter would be there, would still recognize her. Maybe Oscar would manage to come. She hadn’t let herself realize how much she missed them. Matt would remind her to hug the grandchildren gently. He had been her tempering hand.

Jeannie traced the outline of the small bag of ashes in her jacket pocket. “We are going together Matt,” she whispered, “just like you promised. Don’t worry. You’ll be glad I led the charge. You always were, in the end.”

Her eyes closed and she sank into sleep as the Mother Board Transport hurtled towards her last adventure.

Gabrielle Johansen creates pieces of speculative fiction and fantasy from her Charlotte, NC home. While she was born in Boston, she has lived in the South most of her life. She has never developed an affinity for grits, but she does love biscuits. Gabrielle is an avid reader, boardgamer and sometime-crafter. Her main partners in all of the above are her wonderful husband and terrific kid. Sometimes her two cats try to join the games, but their strategies mostly consist of knocking pieces off the board.