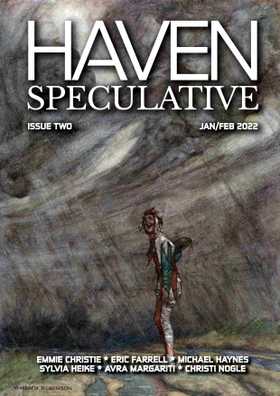 Harmony wouldn't have trusted herself to maneuver her Lectra-Van up to the camp toilet without autopilot, but it was as though the van saw the toilet and, realizing that the driver was stopping for the night, wiggled in on its own. The hatch dropped and unsealed the sphincter gasket, and just like that, they were connected to the camp’s plumbing.

The patio cover went out on its own if it sensed rain or heat or snow, not that she’d been anywhere with snow. The van’s solar panels were said to work in colder climates, but she didn't trust they would.

Harmony stayed where it was mild and bright if she could, but it was becoming difficult. More and more young people were touring, like this crew of eight who spilled out into the adjoining campsite with tents and cases of booze. Their aqua-and-white van was newer but otherwise identical to Harmony’s cherry-and-cream one. She called her van Lovey and loved her dearly despite all the troubles now with the company.

When the kids arrived, three of them came to Harmony’s camp to introduce themselves and circle around Lovey saying how beautiful and glossy she still was after all these years on the road. Harmony was friendly to the three, offered to stir them up some Tang, but that evening when the drinking and hooting started, she lowered all the window-guards and sat on her bed worrying. She considered detaching from the toilet to make for an easier get-away, but she wasn’t safe to drive at night anymore. Though the van was supposed to correct for that in an emergency, she didn’t trust it.

She didn’t trust anything anymore. That was her problem.

It was a good thing she stayed attached because she was up at night to pee. The party had settled earlier than expected. When she let up one of the window-guards around midnight, only two of the kids were still sitting on lawn chairs by their fire, heads tilted together in quiet communion.

Late the next morning, one of the boys came to ask her over to brunch and, though she’d have liked to stay in, she couldn’t refuse their hospitality. They had quite the spread—real orange juice, strong coffee, fruit, a vegetable-based sausage both juicy and crisp. Most compelling was a platter of items she could not name, items the shape and size of pinecones. Two of them were placed on her plate the moment she’d finished her sausage.

“What are they?” she asked, but no one heard. They were talking about something else, some music festival coming up.

When she took a bite, she knew it was something special. Like a walnut but soft as apple fritter, coated in sugar crust. Maybe it was an engineered kind of nut; maybe that was something they made now. She cried a little, eating the first one, and when no one was looking, she wrapped the second loosely in napkins and tucked it into her purse.

When brunch was finished, one of the girls stayed sitting with her while the others gathered the dishes for washing and readied to leave.

“You retired on it?” asked the girl, nodding at Lovey.

It had seemed like a good idea at the time—to give up everything she had for this, for freedom. The company was supposed to keep her in repairs, parking fees, clothes, and food until she couldn’t drive anymore, and then they’d take her into one of their cozy centers. The deal was something a like reverse mortgage, though they hadn’t used those words.

Lovey’s repairs had never been an issue. The clothes were plainer than anything Harmony had worn in her real life, but they were serviceable, and though the best parking spots were harder to find these days she could always find some place to stop. She felt safe enough anywhere just so long as Lovey’s eyelids still closed tight over her windows.

What she couldn’t take anymore was the food. She picked it up from a center when one was convenient, and when she was parked somewhere remote, the box of powders came on a drone.

“It’s not such a good deal for retirement, is it?” asked the girl. “I mean, for a road trip it’s great, but you folks have a hard time, I hear.”

And when she had to come into a center, there was always concern. An eye test, a questionnaire. When she stood at the reception desk, she caught the animal smells of residents and the chiding over-friendly voices of staff. All that just to pick up her box of dust.

Now the girl’s eyes wandered over her clothes, but they avoided her purse. Was she making a note to herself maybe, don’t let yourself get like this?

Harmony excused herself, shouting safe travels over her shoulder, but once inside Lovey’s cool, dim interior, she curled up on her bed. The sound of their breaking camp was loud at first but soon quieted. She thought she heard a rustle nearby and imagined one of them leaving something at her doorside—a box with more of the pinecones maybe, an orange, a bright new sweatshirt. Because that was what would make this whole thing work out, wasn’t it? The kindness and care of strangers. She had to have something to hope for.

A lump came to Harmony’s throat and a wistful, desperate feeling washed over her, but it was a long time before she gathered the courage to go out and check if anything was waiting outside the door.

Christi Nogle's debut novel, Beulah, was published in January 2022 by Cemetery Gates Media. Her short stories have appeared in over fifty publications, including PseudoPod, Vastarien, and Dark Matter Magazine, along with anthologies such as C.M Muller's Nightscript and Flame Tree's American Gothic. Christi is a member of the Horror Writers Association, Science Fiction & Fantasy Writers of America, and Codex Writers' Group. She lives in Boise, Idaho, with her partner Jim and their gorgeous dogs. Follow her at christinogle.com or on Twitter @christinogle.