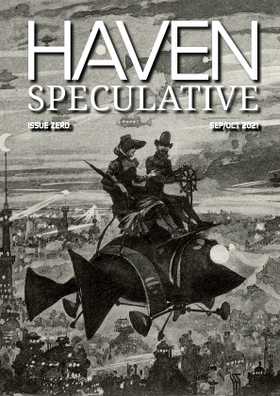 Hampered as she was by the child in her arms, the woman was running less fleetly now. A wave of exultation swept over Guldran, drowning out the uneasy feeling of guilt at disobeying orders.

The instructions were mandatory and concise: "No capture must be attempted individually. In the event of sighting any form of human life, the ship MUST be notified immediately. All small craft must be back at the landing space not later than one hour before take-off. Anyone not so reporting will be presumed lost."

Guldran thought uneasily of the great seas of snow and ice sweeping inexorably toward each other since the Earth had reversed on its axis in the great catastrophe a millennium ago. Now, summer and winter alike brought paralyzing gales and blizzards, heralded by the sleety snow in which the woman's skin-clad feet had left the tracks which led to discovery.

His trained anthropologist's mind speculated avidly over the little they had gotten from the younger of the two men found nearly a week before, nearly frozen and half-starved. The older man had succumbed almost at once; the other, in the most primitive sign language, had indicated that, of several humans living in caves to the west, only he and the other had survived to flee some mysterious terror. Guldran felt a throb of pity for the woman and her child, left behind by the men, no doubt, as a hindrance.

But what a stroke of fortune that there should be left a male and female of the race to carry the seed of Terra to another planet. And what a triumph if he, Guldran, should be the one to return at the eleventh hour with the prize. No need of calling for help. This was no armed war-party, but the most defenseless being in the Universe—a mother burdened with a child.

Guldran put on another burst of speed. His previous shouts had served only to spur the woman to greater efforts. Surely there was some magic word that had survived even the centuries of illiteracy. Something equivalent to the "bread and salt" of all illiterate peoples. Cupping his hands to his mouth, he shouted, "Food! food!"

Ahead of him the woman turned her head, leaped lightly in mid-stride, and went on; slowing a little but still running doggedly.

The instant that his foot touched the yielding surface of the trap, he knew that he had met defeat. As his body crashed down on the fire-sharpened stakes, he knew too the terror from which the last men of the human race had fled.

Above him the woman looked down, her teeth gleaming wolfishly. She pointed down into the pit; spoke exultantly to the child.

This story was first published in If Worlds of Science Fiction in September, 1952. It is currently in the public domain.

T. D. Hamm (1905 – 1995) was a science fiction writer with stories published in If, Tomorrow's Universe, The Magazine of Fantasy and Science Fiction, and several others.