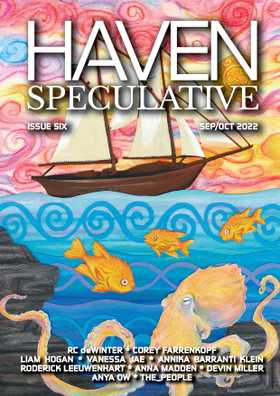 Yente Visscher froze on the crowded Zürich street, arrested by the sight of the distant Alps. Five years on and they still did that to her, some undefinable Dutch strand of her DNA making her powerless in their presence.

“Vorsicht,” a passerby shot at her, bumping into Yente with enough force to spill iced coffee from her cup.

She immediately felt stupid for apologizing to the brute and submerged back into the stream of commuters braving the morning heat. With her company blazer and cactus-leather attaché case, she blended right in—nothing about her screamed refugee from the Low Countries. There were so many of them here now, and almost all of them had lost everything but their lives. Death had come for the Netherlands in the form of a hundred-meter-high tsunami, whipped up when an undersea methane store near Norway discharged overnight. A point seven increase in global temperature was all it took.

There but for the grace of god, Yente thought. She was lucky to have a good job with one of the organizations that had survived the deluge: the brand new banking consortium AIR, which represented the interests and vestiges of the Dutch financial world. Five years on, there was still so much to do.

Her office was in the gray-arched AIR building near the mouth of the river Limmat. She scanned her card at the security gate inside and went up, her attaché case pulling heavily at her hand, the documents and files within enough to crush a person as well as any sledgehammer.

Her first appointment was already seated across from her desk: Jonas Heek.

“Goedenmorgen,” he said before she’d even sat down. “A nice change to speak our own language here.”

“Surely that’s not much of a problem in Zürich? Almost four percent of it is Dutch now.”

She folded her jacket over the chair and opened her case, deliberately taking her time to size him up. Jonas was in his late thirties but had that eternally boyish look on his face. The Dutch had never bred proper men, only man-children, she thought, drifting through life without a care in the world. He was no different—the way he sat there flaunting unmerited confidence that things would go his way. Yente loathed that attitude, knowing for a fact their conversation would turn less cordial very soon.

“Mister Heek, you know why I invited you here, right?”

“I received a summons—something about my mortgage.”

“Yes. You defaulted on your payments five years ago. We discovered this only last year because of the difficulties we had merging our systems. Since then, we have not gotten any response from you on our letters. Reason enough for a chat.”

“We are talking about the mortgage for my home at Ruyterstraat 41 in Apeldoorn?”

“The house that was utterly destroyed in the tsunami that flooded our country from Groningen to Limburg?”

“And this doesn’t strike you as odd?” he asked, tapping the rim of the desk with his fingers, as if in anticipation of some flash of insight on her part.

“Miss Visscher, our country ceased to exist five years ago. The whole concept of being a Dutch citizen is gone, as is our legal framework and any obligations we had to one another. The flood washed away everything we had—including any debts.”

It was nothing Yente hadn’t heard before, and the realization suddenly vexed her. God, they might as well print it on a leaflet and distribute it among all the mortgage defaulters. But it always ended the same. “The AIR consortium thinks differently, Mister Heek. Although our government is in limbo pending investigations on how to hold proper elections, our legal framework, as you put it, hasn’t gone anywhere. Therefore, the contracts and mortgages are as binding today as they were when you signed them.”

Jonas leaned forward and looked at her with big open eyes, lips curved into an easy smile. “Let’s skip ahead to the point where I default and you claim ownership of my house at Ruyterstraat. It’s on the bottom of the North Sea—put it on the market, try to recoup your losses, just don’t bother me with it anymore.”

Yente sighed inwardly, hating what she was about to do. This was when it inevitably all went sour. It’s better than living on the street again, selling god-knows-what, she told herself.

She produced several documents from her attaché case and slid them over. “I’m afraid it’s not that simple. The tsunami was officially declared force majeure—an act of god—such that the normal conditions don’t apply. All assets and mortgages were frozen by the then-ruling government. Trading was prohibited to prevent Europe-wide economic collapse.”

Jonas’s gaze lost its conspiratorial glint, and he sat a little more crookedly, his eyebrows knitting gloom over his face. “Those were emergency measures. They never, never meant to have you banks put the thumbscrews to us over defaulting mortgages for houses that don’t exist anymore.”

“Nevertheless, those are the rules and laws currently in effect.”

“So, you expect me to pay off a mortgage when I barely get around on the stupid Zürich stipend?”

“I…” He sunk back into his seat, reality catching up to him at last. “I had heard about AIR doing this. Forcing folks to cough up for old mortgages. But I always thought… you only went after the bad guys? Former landlords and investors—the people who had made such a damn mess of our housing market in the first place. But this…? Me? I’m a nobody. It was just a tiny house. I hurt no one.”

Former landlords? No, that wasn’t AIR’s business at all. Yente’s cases were specifically the small timers like Jonas Heek, sitting here across from her. The thousands of commonplace chumps who surely must deserve it, because why else would they end up in this room? But not one of them had ever spelled it out so lucidly to her.

“This conversation,” he mumbled, “was supposed to be a mistake. We’d laugh it off together.”

I had forgotten how bad it was even before the flood, she thought. The housing crisis. The ever-widening gap between the haves and have-nots. This man… Jonas… actually thought the deluge had served as the great equalizer. And now he’s sitting here and I’m telling him—

“It’s not a mistake. I’m sorry. You signed a contract.”

It was as if all the oxygen got sucked out of the room. Jonas sagged, pawing helplessly through the stack of papers he’d been handed.

Yente tried to reply as kind as she could, as accommodating as her strict instructions allowed. “The way I see it, the choice is between the following: either you return home unable to pay your debt and we strip you of everything you currently own and all future gains. Or you follow me to HR and receive suitable employment in our organization. You can work here to pay off your mortgage.”

“That boils down to indentured servitude,” he said, eyes downcast and his voice a frog’s croak.

“Try not to think in those terms,” Yente answered, knowing all too well what conflicting feelings were rushing through Jonas’s head right now. “AIR employment offers direction, too, and has its benefits. You’ll likely be sent to another city to help with the outstanding accounts. But it’s a better fate than the alternative.”

He nodded then and she knew he’d scribble his name on another contract he could never erase and become a cog in the great AIR machine. He’d wrap himself in the same blazer that was suffocating her now, carry the same attaché case like a millstone around his neck. Like Yente, he’d soon represent the interests and vestiges of the Dutch financial world.

Five years on, there was still so much to do.

Roderick Leeuwenhart writes SF from a Dutch angle and frequently dreams about East Asia. He won the 2016 Harland Awards, the Netherlands' top prize for speculative fiction. His work has been translated all the way to China. The Gentlemen XVII is his most recent novel, asking the question of what would have happened if the Dutch East India Company had never ceased to exist. Find him online at www.roderickleeuwenhart.nl