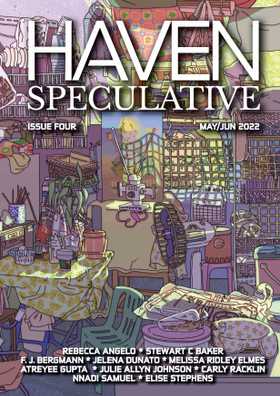 By Carly Racklin in Issue Four, May 2022

I.
Last summer I buried a body under the apple tree
and every now and then I see the ghost plucking weeds
and picking seeds from his teeth.
He spits them at my window at night.

He says he’s tired of eating rotten fruit;
he wants to know what it is like to hold something
without it being bruised—slick
and black. The creatures that crawl
into his mouth at night
are dense, and I hear him
choke in his sleep,
like an owl on the bones
of its prey.

“Your heart is too ripe to eat,” he tells me,
but goes looking under roots and beds
to find something sweeter instead. He doesn’t know
that longing is a greedy thing,
and it will grow sour in his sleeping veins.
The beast it will make of him
will crave roses and ruin alike.
But what grows in the garden
of a dead man’s heart
can only rot.

He groans at night, under the tree, spinning in his grave
I hear him cry out in the dark,
Tell me, why am I always starving?

II.
I found him in the kitchen one morning,
green hands clutching fistfuls of glass,
lips specked with sugar.
Every sunrise since, he finds a way inside
to rummage through each shelf and drawer,
clearing cabinets and swallowing
jars of syrup whole.
Day and night, he gorges and grows,
until he is no longer a man at all.

He forgets how to speak one evening.
Black sap drips from his mouth
and pools in the cracks of the wooden floor.
Flies circle round his head, crawl in his ears
but he does not notice them.
He only eats some more.

When toadstools sprout from his eyes, I lock the doors.
But he breaks the frame with curling weeds,
and stones from his moss-mottled hands.
Bees swarm, and the house is fallen, painted,
honey-sweet and sick.

I beg him to leave. I say there’s nothing left.
He cannot reply, but I know his answer.
I see it in the spiders and maggots and worms,
What else is there for the dead to eat, but the living?

III.
I set a feast one night,
the table laid with berries, wine and apples from his tree.
He climbs out of the dirt, through the doorway, and gazes
down at me from that ill-fitted skin.
I can almost hear the soul behind the decay,
a flytrap of a man, lost to his hunger.

I sit across from him, and watch
as the red rolls down his chin, staining the shirt
I buried him in. When he skulks back to sleep,
I fetch a shovel and an ax
and I follow him to the garden gate.

He sinks down deep, dragged under in the fleeting hands
of a sugary haze. Curled in a blanket of roots.

First, I cut down the tree. The limbs moan and scratch at my arms,
fruit falls like hail, rotting, rolling into his grave.
A while after, I stare down at him asleep
a withered child in a tainted womb
and I climb in over him. I kneel atop the mud and take the ax
to his throat. Syrup spills onto my hands and I finally find his heart—
a chrysalis.

I don’t remember what flew out of his chest, only that it smelled
of rain, when I peeled the roots from around it
and that it was light.
Every earthen thing about him died then,
wilted away like old paint on stone
and left behind the man I once called to from the window.

I kissed his lifeless face, placed a marigold in his pocket
and piled the dirt upon him until dawn bloomed on the horizon.
He rests under a new garden now, and the roses bloom their reddest
right atop his tomb. Wild raspberries grow where the tree stood.
Every summer, I leave some behind after picking
and in the sunset’s glow, I see him still, smiling
and licking nectar from his fingertips.

Carly Racklin is a fantasy and horror writer, editor, and hobbyist illustrator currently nesting in the mountains of Tennessee with her friends, many plants, and the several families of birds that she feeds from her porch. She has written for a horror film festival and currently works in social media marketing. Her work has appeared in Metaphorosis Magazine, Mirror Dance, Luna Station Quarterly, and more. You can find more of her work at carlyracklin.com and follow her on Twitter @willowylungs.