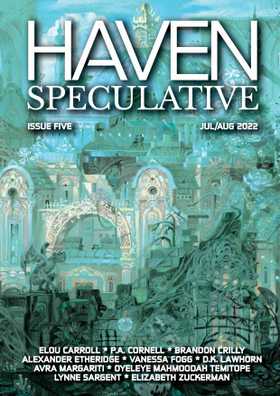 Conquest rides into our neighborhood on the supple leather seat of a block-long limousine that his driver parks next to a mostly dead jalopy. The seams of his finely tailored suit are close to bursting, his massive frame fighting hard to break free of its cloth restraints. The cigar resting in the corner of his mouth never grows any shorter or longer, but remains an eternal, slobber-covered nub. In his hand he clutches the deed to the factory that has been boarded up for longer than any of us downtowners have been alive. He promises us jobs through pearly white teeth and a millionaire’s sneer. And when the factory is billowing black smoke and filling the river with sludge once more, we flood through the doors and take what little he offers us.

While we are busy breaking our backs in service to Conquest, he uses the money we have made for him to buy the other empty buildings in our neighborhood. Investment in downtown’s future, he calls it. A revitalization effort on a place that is already vital. Proof he is here for the long run. Renovations start, run by those are lucky enough to escape his factory. He brags to the city council about how downtown is finally becoming beautiful, erasing the beauty that was here long before him. And when his beautiful new buildings start to fill with tenants, it is not us who occupies them.

Next to appear is Famine, hanging off the back bumper of a produce truck with ‘organic’, ‘non-GMO’, and ‘imported’ in big, blocky letters on its sides. Under her billowy dress of undyed linen, she is rail thin. She has that Hollywood style we have only ever seen on television and movie screens. She tells us that all we have to do is eat like she does, and we too can be beautiful. Coffee shops pop up, selling things labeled in exotic languages with prices equal to an hour’s wage down at the factory. Bistros with lobster driven in fresh from the coast and free-range, grass-fed, no-antibiotics-ever beef used in the hamburgers. A lot of us are related to the old-timer whose fifty-acre farm outside the city provides the potatoes though.

The grocer we have gone to all our lives cannot afford to stock these new foods, so Famine buys out the physical location with assurances to the owners that the money will save the store. But the lease jumps up, and the windows are boarded up three months later. Within a week, a gourmet vegan grilled cheese shop guts the place and moves in. Local leaders, the folks who tried to start a union at the factory and were fired for their efforts, appeal to the City Council to give us a new grocer, because now the closest supermarket is on the other side of the city. The City Council votes no and moves on to the next order of business.

War thunders in on a brown motorcycle covered in flashing lights and shiny decals proclaiming his authority. He stands as stiff as a board in his tight, powder blue uniform, his hands resting on the tools hanging from his hips. His eyes never come out from underneath his reflective aviators, and whenever he gets a free moment, he can be found shining his boots to a mirror shine. He comes with an army at his heels. His goal is clear and he repeats it all the time: Peace and Security for Downtown. His time is spent protecting the interests of his siblings from outside forces, and since we are the only things downtown outside of Conquest and Famine’s interests anymore, his time is spent on us.

Our leaders are the first to disappear. Arrested on charges of disturbing the peace while organizing a protest of the French restaurant Famine just opened. We stay quiet, under War’s ever watchful eye. But he gets bored easily and begins to drum up reasons to harass us whenever he can. The moment we react, he slams us to the ground or on the hood of a car or against a wall and drags us away to dank six by eight cells. Finally, his soldiers get too nervous outside the middle school and destroy one of our beautiful boys for all downtown to hear, even over the drone of the factory. The City Council gives the soldiers accommodations for heroism in the line of duty.

Finally, Death putters in on a cream-colored vespa, a moving van close behind them. They pull up to the house that the murdered boy’s family was evicted from a few weeks after his funeral. When they take off their cherry-red helmet and riding goggles, their flowing golden locks ripple past their waist, their eggshell skin shining in the bright morning light. With an ease that says they have done this many times before, they direct the movers on which pieces of hardwood furniture and high-end electronics to bring into their new house first. With a grunt, the movers lift a baby grand piano and disappear with it through the propped open front door.

Conquest rolls up in his limousine and hands Death a copy of the rental agreement. Then Famine swings through in the food truck expansion of her vegan grilled cheese joint and presents Death with a welcome platter of white chocolate macadamia nut oatmeal cookies. All the while, War is sitting at the end of the block, tense on his motorcycle, two riot-geared soldiers flanking him, his sunglasses and boots reflecting Death in triplicate. When we gather on our stoops to watch, Death smiles and waves at us, overjoyed to meet their new neighbors.

We bite our tongues until the taste of pennies fills our mouths and wave back.

D.K. Lawhorn (he/him) has stories that have appeared in Pyre Magazine, Sick Lit Magazine, and Ghost Orchid Press. He is a citizen of the Monacan Indian Nation and lives on his ancestral land in Virginia with his legion of rescue cats. He is studying Native Speculative Literature at Randolph College’s MFA in Creative Writing program. Follow him on Twitter @d_k_lawhorn or visit his website at dklawhorn.com.